The much anticipated CLIENT PATCH arrives tomorrow! Patch notes follow down below. The brand spanking new EiF Launcher will be available to load up the patch, as well! Instructions will be available. I’m sure you will all be grateful  I didn’t add my *squees* and *happy dances* throughout these notes, you’ll just have to guess at which ones are my favorites!

Halyn’s been doing a lot of teasing about the GCW lately. He’s been tossing up pictures on Discord with little explanation of what we are seeing. If you scrutinize them, you might begin to see some of what he’s got planned. One awesome thing is he is having a great time creating the GCW! It’s going to be unique to EiF and loads of fun! Even for us non-PvPers!

Enjoy and see what you can discover with the pics below! 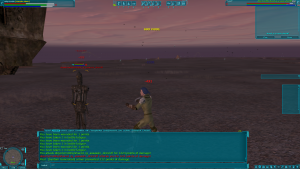 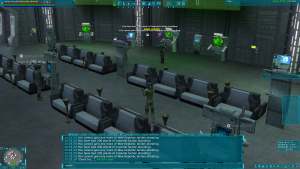 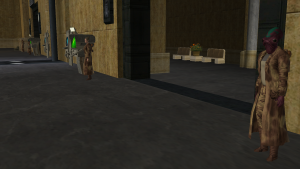 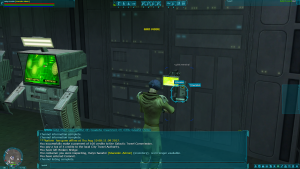 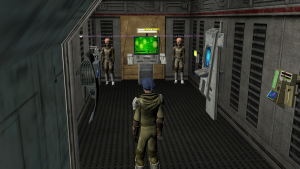 One of the pictures is a tease, but not with the GCW.

While the EiF developers do have new content soooo close to being released, I have started spending time checking out the old content. One of the features from live I never participated in was the Old Swoop Tracks! I found this information on the Internet archive the Way Back Machine. Now that name alone is a flashback from my childhood days!

Enjoy! EiF might just have a day at the races planned soon(TM)!

“First things first, swoop racing is illegal. The Emperor doesn’t allow for formal competitions. Get it out of your head right now that your holo-picture will be idolized by little beings across the galaxy. There ain’t no official races. Now for a fee, I could be inclined to give you the waypoints of some old tracks that us swoopers used to run. Some former champ left a protocol droid behind at his favorite tracks, you know, just as an historic marker. If they ain’t rusted out, I think they still record times. I’ve even heard of some small time chumps using those droids as official time keepers for their own racing events. Some don’t even use swoops, they run it or ride animals around it. But I ain’t part of that. No sir, the Empire treats me too well to want to break the law. “
– Former Professional Swoop Racer

Star Wars Galaxies now feature the following race tracks: Old Mos Espa Arena Circuit, Agrilat Swamp Circuit and the Keren Street Race. The Old Mos Espa Circuit will allow you to relive the exciting pod race featured in Episode I. The Agrilat Swamp Circuit takes you into and through dangerous Agrilat Swamps on a race reminiscent of the one between Han Solo and Dengar. Finally, the Keren Street Race challenges your skills by leading you through the narrow lanes and tight bridges in the city of Keren.

To begin, simply converse with the race protocol droid. If you have never raced that track before you will be given some options to describe how the race is run or to start a race. When a race is started, you are given a waypoint to the first leg of the race. Jump on your vehicle or mount or start running as fast as you can. Upon reaching that waypoint, you are given a waypoint to the next leg of the race and receive a message listing your current lap time.

Upon completing the entire circuit you are given your total time. If you have beaten your personal best time, you receive graphical text for all to see. Conversing with the protocol droid again will register your last time with it and it will announce the time registered for all to see. If you beat the current daily record, you will receive a badge appropriate to that track.

If you have already completed the circuit, you can speak with the protocol droid again to do one of the following:

·  See who the current record holder of the day is.

·  Have the droid announce your personal best time in spatial chat for bragging rights.

Please note that currently you cannot adjust the speed on vehicles. Getting the best time will require careful negotiation of terrain, avoidance of obstacles and enemies and planning at least one leg ahead to hit the turns from the best angle. Remember to use the SHIFT key (by default) to slow down around tight corners.

The true purpose of the tracks is to assist players in running their own races. See the Events Team’s Host a Race for suggestions on how to run your own player event race and check the Player Events Schedule to see if there are any races being held this week.

Swoop Racing in the Galactic Empire

As old as the Old Republic, swoop racing has been around since the second swoop was built. Swoop racing is a very dangerous sport. So dangerous in fact, that swoop racing was only allowed on sanctioned racing tracks and illegal outside of all official tracks and arenas. This high speed sport was originally kept under tight controls because it was as dangerous to bystanders as it was to the racers themselves. At over 400 miles per hour, an unsuspecting street merchant or innocent bystander exiting their homes was at lethal risk simply by being in the right place at the wrong time. After the rise of the Empire, the Emperor was more interested in imprisoning the fringe and criminal elements whose vehicle of choice were swoops and also making sure to take these powerful vehicles away from anyone who could oppose him. Swoop racing was made illegal and used as a tool to imprison all of the best swoop racers to jail racing criminals and insure there would be no one to teach the best techniques to a new generation of racers.

“First things first, swoop racing is illegal. The Emperor doesn’t allow for formal competitions. Get it out of your head right now that your holo-picture will be idolized by little beings across the galaxy. There ain’t no official races. Now for a fee, I could be inclined to give you the waypoints of some old tracks that us swoopers used to run. Some former champ left a protocol droid behind at his favorite tracks, you know, just as an historic marker. If they ain’t rusted out, I think they still record times. I’ve even heard of some small time chumps using those droids as official time keepers for their own racing events. Some don’t even use swoops, they run it or ride animals around it. But I ain’t part of that. No sir, the Empire treats me too well to want to break the law. ” At the heart of swoop racing is a simple vehicle called a swoop. Designed for one passenger, the vehicle is basically an engine with a seat. To drive the swoop at speeds that can exceed 400 miles per hour, the driver is equipped with kneepads, footpads and handgrips that control speed, steering and altitude. To enhance the handling, the driver must carefully shift his weight in the seat. This vehicle has no armor, no weapons and no crash protection, but it does have a seat belt.

Swoop racing is a popular sport that takes place in huge domed arenas called swoop tracks. The arenas hold tens of thousands of spectators. The race is made up of circular flight paths and obstacle courses designed to challenge the agility and skill of each driver.

The Return of Swoop Racing

Since the discovery of the first illegal swoop tracks earlier this year, swoop racing has begun to emerge. Too small to be cared about by the Emperor as he plans his attacks on the Rebellion, swoopers have used the modules from the original race droids to create new race droids and new tracks. Here are the latest reports on the new swoop tracks:

“This is one of the longest and most arduous races in the galaxy. Don’t bother with it unless you have the time and stamina. The Empire doesn’t come here often, so it gets a lot of use from swoopers looking for an illegal race. The trouble is most of them do not complete the marathon. Beware of dangerous beasts, pirates, confusing mazes and a very large and active volcano.” “Mostly this track has been used for recreation and youth races; very few professional events have been staged here. The course primarily sticks to major waterways around Nashal and therefore is impractical for mount or foot racing. On a hover vehicle, it is considered a delightful afternoon outing.” “Legends say that this track retraces the route used by local smuggler, Trein Veltin as he tried to elude authorities intent on his arrest. Weaving through the streets desperately trying to lose his pursuers he made it out of the city. Unfortunately his escape was cut short due to a fatal collision with a flesh eating chuba. Since that time many have made the run in his memory. Eventually it became a semi-formal track for a thoroughly illegal street race.” ((sorry for the day late! My family arrived in town and chaos ensued!)

One of the fun features of Star Wars Galaxies is the Badges which can be earned. Blue Pyros and Kelta updated the list of badges to make it current for EiF. I pulled the initial information from here.

My guild likes to do activities as a group and on a few occasions we’ve gone out and worked on the Exploration badges for a particular planet. Badge hunting is a great group activity. It’s also a wonderful way to scout for RP locations while racking up those badges!

Ohhh! While editing and formatting this information, I realized the badges from Taanab are not here! I’m not going to list them now, but I challenge you to go out to Taanab, find them, and post them here!

Q. What are Badges?
A. Badges are essentially just lines of text that appear in your Character Information Sheet(Ctrl+C, and Ctrl+P (this might be different, depending on keybindings)). Badges are earned by doing various tasks in EiF. These tasks can be as simple as visiting a location, or as challenging as fighting through one of the toughest dungeons in the game. 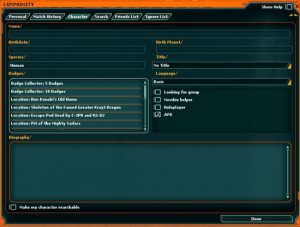 How to: These Badges are claimed simply by visiting certain special locales. AudioOrgana has put together this wonderful guide, which details all the Points of Interest in the game that will grant you badges.

How to: These badges are received when you master any profession.

How to: In the Royal Palace in Theed the Trivial Librarian awaits the explorer. She will ask a series of questions which the explorer must answer them. There is no limit to the number of tries, so don’t worry about getting any questions wrong.

…answered all the trivia questions posed by the Theed Palace Librarian.

How to: There are various races around the galaxy. Beat the current record holder, and you’ve got yourself a badge.

How to: This is a series of quests, which can take quite some time to complete.

How to: The Warren is a dungeon on Dantooine [Under your POI tab in your datapad]. There are old guides which can bee Googled to work your way through the Warren

…showed great compassion toward the widow of an Imperial worker.
…proved Colonel Teraud’s perfidy and rendered great services to the Empire!