What others would be able to know about your character. Add an OOC section for things which could be discovered through RP!
Post Reply
4 posts • Page 1 of 1 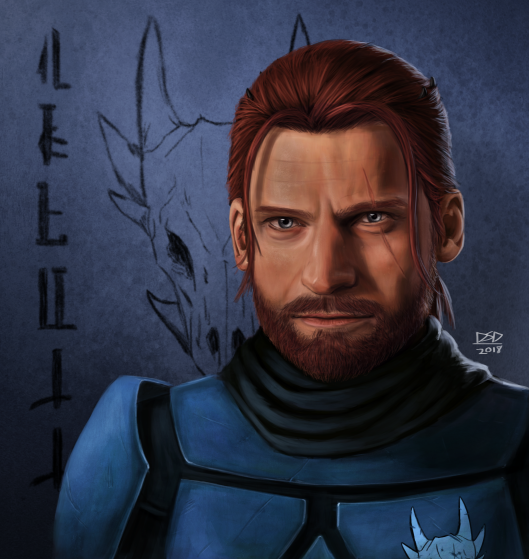 
Appearance:
An unusually tall human who still walks with an almost militaristic manner. His face is heavily scarred, pocked here and there with various sized marks, the most notable being the large horizontal scar over his left eye and the two on either side of his jaw. Poking through his red-brown hair, are small, charcoal colored horns, crowning just above his forehead and around the length of his scalp. His hair is almost always kept in a ponytail, even when wearing a helmet. 'Nosolee is rarely out of some type of armor, most notable of which is his heavily customized Mandalorian armor. - His cybernetics are only replacements for lost limbs. The only advantage they provide is that they are much more durable than natural bone -


Tattoos:
- A Lava Flea head slightly coming out of a yellow lined circle on his right shoulder
- The Prudii Clan symbol of a Katarn Skull with the word "Prudii" written in Mando'a underneath on the left side of his chest 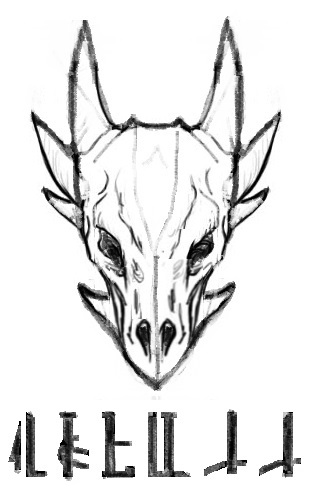 Likes:
1: Lava Fleas and Dewbacks
2: Working at his forge
3: Lists 32 BBY:
- Begins his training as a Mandalorian

30 BBY:
- Kills his first sentient, a Doshan Slaver, after discovering the slaver attempting to kill a young Wookiee
- The Wookiee Bekabukk pledges a Life-Debt to 'Nosolee after being saved by him

29 BBY:
- WIth the aid of Bekabukk, his father Tal'len, and a Clan of Wookiees, brings down a Slaver Camp on the outskirts of Kachiro

28 BBY:
- Begins his Four Trials by slaying the Katarn patriarch known as Jagged Maw in a Wroshyr grotto
- Crafts his first hunting blade from the tooth of Jagged Maw

27 BBY:
- Sneaks into a Slaver camp with Bekabukk, rescuing a clan of Wookiees
- Passes his Second Trial by traversing deep into the caves of Kashyyyk by finding the helmet of the Second Founder, Haran Prudii
- Discovers the home of an Unknown Force User deep in the crystal caves
- Learns of his Force abilities and begins training in secret with the aid of the Force User

26 BBY:
- Continues returning to the cave under the guise of a lone hunting trip
- Instructed to find a Kyber crystal deeper in the Crystal Caves for the creation of a lightsaber
- Stumbles across a hibernating Terentatek while searching for his crystal, which he finds in a patch below the sleeping beast
- Successfully extracts the Kyber crystal without waking the Terentatek and brings it back to the Force User
- Crafts his lightsaber using the crystal and another fang from Jagged Maw
- Passes his Third Trial by scaling the Great Tree of Kachiro without any equipment

25 BBY:
- Retreats after being ambushed by Slavers with Bekabukk and two other surviving Wookiees on a hunting trip
- Crafts a set of Mandalorian armor as his Fourth Trial
- Passes his Trials and training, earning a place in his Aliit as a Mandalorian

24 BBY:
- Leaves Kashyyyk for the first time
- Travels to Mandalore with his father, grandfather, and Bekabukk
- Continues his Force training in private

23 BBY:
- Gains an interest in relic finding after joining his grandfather on a hunt for a lost set of armor

22 BBY:
- Learns of his "Master" using him for his own purposes and challenges him
- Kills the Unknown Force User in saber combat using all of his combined training, marking his first Force User kill

21 BBY:
- Joins his father, Tal'len, on several missions aiding the CIS against the Republic in the Clone Wars
- Meets Vasilli Beviin for the first time, though only remembers him when meeting him long after the Clone Wars

20 BBY:
- Tells his parents of his Force sensitivity and training and is embraced and praised for it
- Learns of past Force Users in his Aliit, including the discovery that the Second Founder was actually a Sith male, and is his direct ancestor, along with Draiir Prudii.
- Gains a fascination with droids after aiding a squad of Commando droids with a skirmish on Duros

19 BBY:
- Gains his hatred for Clones after his home on Kashyyyk is attacked by the 501st during the Battle of Kashyyyk
- Discovers a crashed YT-1300 not far from Kachiro with Bekabukk
- Scavenges parts from the wrecks of Clone and Droid vehicles, restoring the YT-1300
- Becomes the Second Mate aboard the YT-1300 "The Argo" after Bekabukk finishes the ship
- Realizes his avid ability at gunning while ambushed by Rogue Droids above Naboo in The Argo

12 BBY:
- Kills a Jedi Knight after taking on a bounty from the Empire, marking his second Force Sensitive kill and his first lightsaber trophy

9 BBY:
- Promoted to Master Sergeant Prudii
- Becomes the next Alor of Aliit Prudii after his Grandfather dies

8 BBY:
- Loses his entire squad on Endor's forest moon on a recon mission
- Dshonorably discharged from the Empire

5 BBY:
- Joins up with a Mandalorian Mercenary outfit, meeting Vasilli Beviin once more, and travels to the planet Tempestus
- Shatters several vertebrae after falling off a cliff on Tempestus
- Receives his first cybernetic implants; A cybernetic spine
- Receives a cybernetic right arm after losing the original to an Imperial sniper in Black Sands, Tatooine
- Joins the Law Enforcement group in West Carova
- Takes a bounty out on a Force Sensitive, marking his third Force Sensitive kill
- Captured by Black Sun and is tortured.
- Receives a cybernetic jaw after his is completely shattered

4 BBY:
- Captured by another group of pirates who torture him and slice off his cybernetic right arm and his left leg
- Gains a cybernetic left leg
- Loses his left arm after a fight with Doshan Slavers
- Gains a cybernetic left arm
- Aids several Stormtroopers in defending against a rogue Force User, killing her in the battle, marking his fourth Force User kill and second lightsaber trophy
- Caught in an ambush just outside of West Carova and is gunned down by an E-Web cannon
- Has the last of his limbs replaced by a cybernetic
- Marries Lu'nara Starwolf
- Becomes the father of Rhinjin Prudii
- Visits Tempestus again with Vasilli and Xalcla, losing both eyes in an ambush by local creatures
- Gains cybernetic eyes
- Captured by Imperials and sent to Naboo where an Inquisitor injects him with a Sith poison
- Loses control of his Force abilities due to the Sith poison and nearly destroys himself and his ship, The Impenetrable
- Escapes to Dathomir to assist with the Imperials located there
- Ambushed by Nightsisters and captured

0 BBY:
- Manages to Escape Dathomir, losing his armor in the process and learns of the death of Bekabukk
- Locks The Argo away on Kashyyyk
- Finds his way back to Tatooine
- Meets Taylah Ma'Ordel in Paradise Dunes
- Flees Paradise Dunes while being pursued by Imperials
- Finds a job in law enforcement in the town of Savareen
- Forges a new set of Mandalorian armor from two separate sets of ancient armor
- Dies after an ambush in Savareen, but is brought back to life
- Marries Taylah Ma'Ordel on Tatooine
- Promoted to Sheriff of Savareen
- Becomes the father of Tahlia and Thara Prudii

2 ABY:
- Flees Savareen after the Galactic Empire takes control of the resort town due to its location near their secretive Hyperdrive Facility

5 ABY (Roughly):
- Lands on the shadow port space station Known as Jato with Taylah Prudii
- After assisting the crew of Jato and several mercenaries, is made Head of Security aboard the station
- Moves into a home in the newly founded city of New Zeltros on Naboo
- Divorces Taylah Prudii
- Resigns as head of Jato Security
- Finds a mysterious medallion in his belt pouch after a trip to an asteroid filled with droids and cultists with the Jato crew

6 ABY (Roughly):
- Returns to the galaxy at large after spending half a year on Kashyyyk assisting with Clan business and taking care of his children
- Joins a chapter of the Mandalorian Protectors lead by Thaych Tsanthar and is named Quartermaster
- To be continued...
Last edited by Looni on Thu Jul 18, 2019 2:24 am, edited 6 times in total.
Top

Added a few extra things for some fluff! And some pictures, because who doesn't like details?
Top

Updated! Took away a few things that are no longer relevant and fixed up a few details.
Top

Users browsing this forum: No registered users and 2 guests