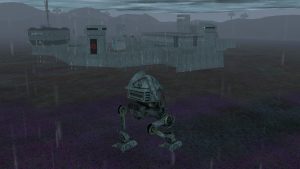 Tensions are mounting. Imperials and the New Republic alike are setting the stage for invasions. Armies are in training, troops being dispatched, leaders are coordinating the survival of their planet or the take over of another one. Bases and Outposts are being placed in preparation. Some are  placed to intimidate small cities, others located more stealthily in the lesser traveled areas of planets. Training is underway to take out these bases, some preemptively in hopes of turning back an invasion.

Join your faction today and start preparing. Below is the training manual to take out a base. Learn it. Use it. Don’t let the other side take over your planet!

Base busting was a very popular PvP event in SWG Live. It was content driven by players. A faction could plop down a base, complete with NPCs and those deadly turrets, to protect a city or outpost. The opposing faction would search out these bases and then make plans to bust the base wide open.

The planetary invasions in Starports are designed around the base busting model as well.

Below is a guide I found from the old SWG Live forums. It’s been tweaked to explain the new base busting design of EiF’s developers.

The smuggler must have Molecular Clamps and Laser Knives.

Find an opposite faction spy who is at least a Warrant Officer II. They can enter any base and look for the Main terminal to check its status. The base’s terminal will indicate how much time is left before the base is vulnerable to attack. For those placing bases, the countdown starts when the base is dropped.  The base will be vulnerable to attack for two hours.

If a spy is not available, use /tar power. If the base is vulnerable, you will be able to target its power regulator.

Starport Note: These are only vulnerable when an invasion is active.

When the team gets to the base/starport, turrets should be taken down first.

You cannot enter the base while the turrets are up.

Remember there is a timer ticking down!

Make sure that system messages are enabled in your options

First slice: The Bounty Hunter on the Uplink Terminal

Second slice: The Smuggler on the Security Terminal:

Third slice: The Doctor on the Override Terminal

Fourth slice: The Commando on the Power Regulator

Goal: Turn off the power at the base

Fifth slice: The Squad Leader on the Primary Terminal:

Defend the base for 60 seconds to protect the countdown. An overt defender can shut down the activation sequence. (The 60 second countdown is subject to change.)

Special thank you to Halyn, Abi, Anishor, Kelta, and Alhai for their help in reviewing this, making suggestions, and clarifying things for me!