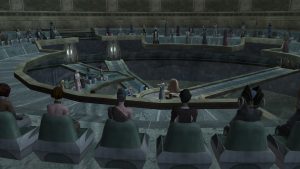 Rumors of a Galactic Civil War erupting are increasing. Stories are spreading of Imperial Moffs attempting to consolidate their power in the wake of the Emperor’s death. Mon Mothma is rallying the Rebels to form a New Republic in the wake of their success against the Empire. Planets all over the galaxy are preparing for war on their soil. Calls are being put forth for retired military to come back and lead the scattered troops. The NR looks to each planet’s citizens to join them and stabilize a New Republic. The Imperials expect citizens to demonstrate their loyalty and help maintain the Empire. 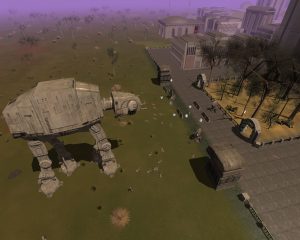 Many in the EiF community have participated in two live tests of the GCW invasion system which greatly helped the devs and the players learn more about what is needed to improve when the entire GCW finally goes live! New and returning players continue to swell the population. Crafters are working hard to meet the demands of the growing community, as it prepares for the GCW.

Part of players’ preparation is gaining enough faction to be able to participate in the exciting, original content exclusive to  Empire in Flames. This Feature is one in a series to help players prepare. This week we are concentrating on gaining factional alignment.

The GCW’s factions are Imperial and New Republic. You will need to earn 200 faction points to show a faction recruiter you are serious about joining their cause. These are earned by:

Once you have your points, locate a recruiter. They will let you join the faction and you will gain the rank of private. There are links to locations below, but there will also be recruiters at the GCW Basecamps and in the defending faction’s city.

To participate in a GCW invasion you will need to already be aligned with a faction. When you enter an active GCW invasion, you will automatically be made Special Forces.You will be vulnerable to enemy players, NPCs, and their equipment, such as turrets.

Special thanks to Kelta for editing and Halyn for reviewing for accuracy!