This week is another installment in the EiF chats with staff, featuring BluePyros! 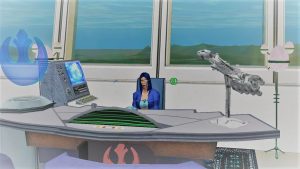 Blue: I played from mid CU all the way through the NGE

Blue: I started on Intrepid but transferred to Starsider, as that server faded a little over a year before the free transfer initiative.

Blue: In the CU I was Rifleman/Commando and NGE I favored commando early, but quickly became and stayed smuggler for the majority.

Blue: Like many I had 2 accounts and often had both going at once.

Blue: Almost everything, but PVP is my jam and I can find enjoyment in.

EiF: What’s a typical gaming session for you, what activities?

Blue: Its varies from days to days, but I try to set long term objectives and work towards them.

Blue: It’s one of the last real sandboxes out there.  Enough structure that it’s not all DIY, but free enough that almost anything is possible.

EiF: What do you enjoy most about Empire in Flames?

Blue: That we have a chance to do things long thought impossible and make a better galaxy with our own hands.

EiF:  When you are not ingame, what do you enjoy doing?

Blue: I’m still a nerd at heart, so I can usually be found playing some manner of game.

Blue: I work for the IT department of a Health and Human Services org.

Blue: Jack of many trades.  The biggest thing I did was converting all the houses into miniature versions, as part of the holo deeds.

Blue: All the old friends and players we’ve lost and left behind over the years.

EiF: If you could find out one thing about our EiF Community, what would it be?

Blue: What draws in the people who never played SWG when it was live.

Blue: I’m not really a dev, more of a modder at this point.  Bending things to my will so they work how I want.