Continuing the Empire in Flames staff interviews. This week we get peek into the life of Anishor! Enjoy. 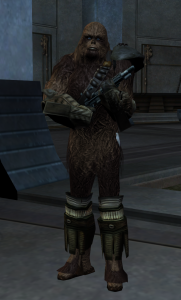 Anishor: I played all versions of SWG.

Anishor: I played pre-CU beta 2 through the CU, So I’m not sure exactly how long that was.  That being said, I followed SWG since it’s first press release in 1999.

Anishor: Starsider primarily, though starsider at launch was full and had stability problems so I played on Ahazi and Starsider 80/20% for the first two months..

Anishor: Pre-CU : Squad leader, Rifleman, Bounty Hunter and Swordsmen, Medic, CH.  With the squad leader being my favorite. I enjoyed helping the base busts or saving Jedi from BH’s with the few squad leader buffs that worked.

CU: Squadleader, Rifles, and Fencer. Was a lot of fun, OP at times too.

Anishor: At the height in the NGE I had 5 accounts, two were for buffing purposes. I had a main account that was for my wookiees, and another for my other RP toons.  With the final account being for secret alts. 😉

Anishor: That’s a really hard question for me to answer, I love PvP on both the ground and in space. But RP is always right there so it’s hard to say.

EiF: What’s a typical gaming session for you, what activities?

Anishor: I check my vendors on my merchants, I check my housing maintenance, then I see if there’s anyone I want to RP or just do missions with.  If not, I just run missions by myself and talk about EiF’s direction.

Anishor: Living the Greatest Star Wars Story ever told, mine.

EiF: What do you enjoy most about Empire in Flames?

Anishor: Seeing other people enjoy the work we’ve put in and just enjoying the game. After that, I  like the hybrid skill set / profession system we’ve created and the balance we’re working towards.

EiF: When you are not ingame, what do you enjoy doing?

Anishor: I play three sports – I fence sabre, soccer, and ice hockey. Though I haven’t played hockey in a bit.  I also I enjoy playing CoD Zombies with my GF or playing the various battlefield series with my brothers.  I also enjoy eating out and working out.

Anishor: I’m a senior software engineer who focuses on User Experience design and user interface implementation with an additional role as a semantic modeller. Though with this focus, I do embrace a full stack approach and am comfortable with a large variety of technologies, languages, and development approaches.

Anishor: I provide engineering support to Halyn as well as being the primary designer responsible for our combat/profession balance.  What that means is I spend time helping Halyn get passed server code bugs, figuring out how to implement some new features on the back end  if Halyn can’t. I also created our launcher, though not from scratch, I forked another team’s launcher and edited to suit our needs.  This is what good engineers do, don’t rebuild the wheel if you can just reuse and modify.  I also created our skill calculator beta.

From the designer perspective it means looking at numbers and doing a lot of play testing on my dev environment. To not only get balance right, but ensuring all the skill sets have a good/unique feel to them, don’t’ want to have cookie-cutter.

EiF: If you could find out one thing about our EiF Community, what would it be?

Anishor: Depends: in EIF – seeing people read the new plans for skill sets and changing minds about long held ideas or must haves. You must stack Fencer with Pistoleer for example.

In my real life job – Seeing a noobie pick up my user interface and they’re able to understand and improve their job in less than 7s.  Also creating a semantic model of complex real world concepts that people were unable to accurately describe without idioms.

EiF: Feel free to add anything else?

Anishor:  Wookiees > Zeltrons  > Zabraks > Everyone Else. But really I enjoy seeing our server community grow and look forward to the heights of we can climb together.