Lots of hardcore decorating has been going on in various places around the Empire in Flames galaxy. Cynabar’s Fantastic Technology in Barataria on Rori. The Gnorton Zoo and Sanctuary in Gnorton on Naboo. The City Hall and Wookiee Guild Hall in Whisperwind on Taanab. Port Jato Space Station. The Cantina in Mos Carova on Tatooine.

These are but a few of the outstanding locations the amazing decorating talents of players in EiF can be found. Not everyone is into decorating. If you are hunter or mercenary out taking contracts (missions), or maybe exploring a planet such as Dantooine and stumble over a group of hostile Janta or Dantari, then you are likely to be running across valuable decorating items.

Some items are more obvious than others such as the bowls and schematics.There is one catagory which isn’t as obvious and those are the loot kit parts. Those annoying orange or blue threads that seem to have no purpose other than to fill up your precious inventory. Yet if you go to Gnorton or the Broken Bridge Cantina you’ll see beautiful orange and blue rugs. These rugs were put together by collecting those threads and adhesives and other things and placed into a loot kit obtained from a junk dealer. 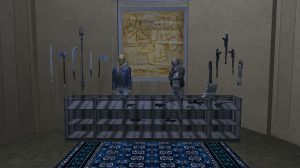 Below is a link to a guide on 5 of the loot kits, pictures of what they look like and the parts needed to make them. You can often find the looted parts on various player vendors and there are some players who often have the completed items for sale. Check in trade chat on Discord, if you are looking for something in particular.

((Apologies for the delay in getting this out. My plans were another interview with an EiF dev, but he’s been out of power for over a week from Hurricane Irma 🙁 ))