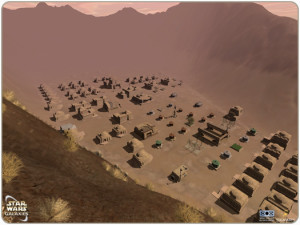 Player housing is one of the best features ever implemented in an MMO, and Star Wars Galaxies took it a step further than most – allowing players to put their structures down in the world for all to see. Not only did players directly affect the world, but they could and did build cities, populated with players and filled with the amenities other players needed.

The downside was the “Coruscantooine” effect. Star Wars Galaxies proved extremely vulnerable to urban sprawl. Major NPC cities like Coronet had “the housing line”, with a virtually unbroken wall of player structures on the edge of its no-build zone.

The longer a server runs, the worse the effect becomes. Given a long-enough run, it becomes immersion-breaking, with supposedly-desolate planets like Tatooine filled with seas of houses.

An Empire in Flames is taking a modified approach to player housing – an approach that was unavailable to the original SWG team at launch.

Player housing will now be restricted to player city limits. (Note: this does not affect placement of harvesters or factories.)

This addresses several problems. First, this allows players to still build cities and decorate homes without the eventual problem of overwhelming a world. Second, it encourages player interdependency – players must work together to build and maintain a city. Third, it prevents hostile city takeovers; no longer will players be able to setup housing outside a city’s limits and wait for it to “expand over” them.

Stay tuned for news on the second half of the upcoming player housing changes in An Empire in Flames!