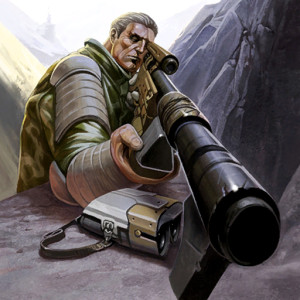 In the classic pre-CU Star Wars Galaxies game, the rifleman was one of the most powerful classes in the game. Through various mechanics, the rifleman shot fast, hit hard, and kept moving. The heavy armor piercing capability of its signature weapon, the T-21, made it one of the two classes of choice for high-end PvE.

Rifleman is taking a bit of a different role in Empire in Flames, with a heavier focus on the sniper side. 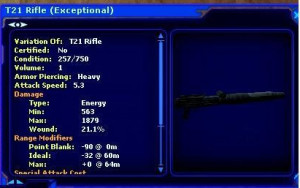 Rifles, as a rule, are the most powerful long-range weapons in the game available to anyone. (Commandos will beg to differ, but they specialize.) Long barrels and heavier hardware translates to greater accuracy at a distance, with a heavy punch to match. While rifles take longer between shots, the extra firepower more than makes up the difference.

That firepower comes at a price. Rifles are awkward in close-quarters combat, hard to aim at close ranges and even harder to shoot while on the move. Riflemen are kings from a prone position or shooting from a rest, but vulnerable to the pistoleer or melee combatant who makes it to their optimal combat distances. 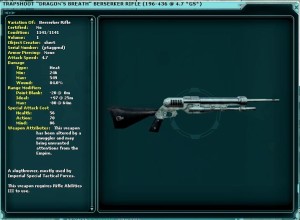 Rifles are favored by heavily-armored, slow-moving characters. Typically, they see use by commandos at the beginning of an engagement or by bounty hunters looking to off a target before he’s even aware of the danger. If played advantageously, a rifleman can kill before his opponent can turn the tables.