“A good soldier always knows how to use whatever equipment is at hand: computers, droids, vehicles, communications gear, and – of course – weapons. Knowing what a weapon is capable of – and more importantly, what it isn’t capable of – can save your life in a tough situation.” ―Colonel Marck Linth, Alliance SpecForces 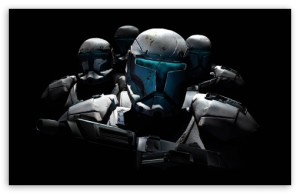 Commandos are the epitome of the soldier. Their lives are committed to the art of combat. When a starship in drydock needs to be destroyed, an enemy factory needs to be shut down, or a new opposing headquarters needs to be blown sky-high, the commandos get the call.

Commandos were important but not overly powerful in early Star Wars Galaxies; post NGE, they were one of the few surviving classes and specialized in heavy weapons.

In Empire in Flames, the commandos are the soldiers on the frontlines of the war. 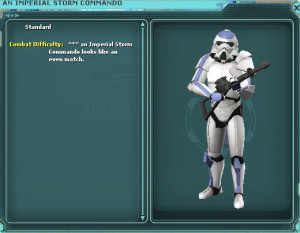 Grenades are simple weapons, quick to use and available from any good weaponsmith. They are great for tossing AoE damage into a tight battle, often hitting multiple opponents with one explosion.

Rocket launchers, on the other hand, are slow and not very accurate, but critically important for taking down enemy vehicles. A volley of rocketfire is the best answer to enemy walkers attempting to massacre friendly forces. 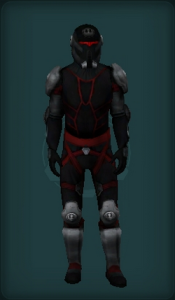 Commandos aren’t limited to explosions, though – they bring plenty of other heavy weapons to the table. Flamethrowers, acid rifles, and disruptors all play a role for a commando – the right heavy firepower at the right time. When it comes to dealing damage or just intimidating an enemy with a big wall of fire, the commando is a go-to soldier.

Commandos bring a variety of skills to the table. Most will bring at least a little medic for field emergencies, while adding some melee skills – typically either unarmed or a one-handed vibroblade for quick combat. Some prefer adding additional long-range combat to the fray, like adding a sniper rifle.