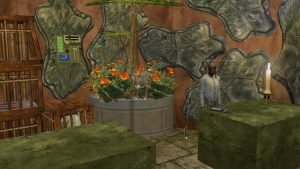 One of the things I loved the most about SWG was the community. In-game, on the forums, in voice chat;  the lasting friendships. Now here we are on an SWGEmu  server and I am the COMMUNITY Manager. The Manager of an amazing community. Empire in Flames was designed to create a sense of community and interdependence. This is especially evident in our economy.

Not much can demonstrate this better than a scenario with which I am most familiar. I have a chef on EiF. The players who go out and play the difficult content have pushed the chefs from the second week of  EiF to start producing the foods and drinks they want and need. They have educated me in particular. A Bio Engineer, Sakari, keeps me informed of the types of resources needed for him to make top quality tissues. Those tissues improve the quality of my foods. Rangers, such as Dana, are hired out to get milk, hides, meats, and bones. Resource gathererlike Fenix, Jamison, and Jaxlyn are contracted with to get the top quality resources when they spawn. Many different people travel the galaxy to sample the current resources and enter them into Galaxy Harvester. I have personally discovered I could never do it all on my own.  I rely on the community to help my chef craft the products they need. 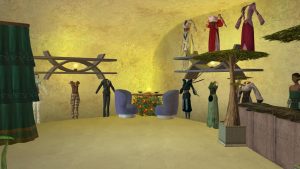 Similar scenarios plays out with weaponsmiths, armorsmiths, and other crafters, as well. Sometimes it’s resource gathering other times is factory runs of completed components from other crafters. A number of our crafters also love to decorate and roleplay. You can go into many of the shops and get a treat just by going into the city, browsing their wares, and sitting down for a little roleplay coffee and dessert.

Below is a list of most of our vendors and suppliers. If you have goods or services to sell, start a post on EiF’s Trader’s Corner on the Forums! 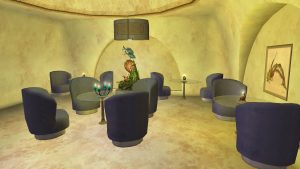 Empire in Flames had a bit of a rocky start. Not because of stability issues (though we’ve experienced a few) or the like, but because of the limits of our hardware.

We had expected to take three to four months to grow to a population of 100 online concurrent characters. We exceeded that in the first week, peaking at around 150. Unfortunately, our server hardware wasn’t up to snuff.

The launch server was an old Dell PowerEdge 2950, sporting two quad-core processors, a RAID array of 136 GB 10k RPM drives, and 32 GB of RAM. At heaviest usage, the server hit around 40% utilization of processing…which quickly became an issue.

While the server had plenty of hypothetical headroom, the reality was that we were past what could provide a smooth experience.

To grossly simplify, the server needed to process updates for each player (and from each player!) on a regular basis. As the number of players grew, the server needed more time to process each and every character before it could start over at the top of the list. In the meantime, action continues to happen; the server predicts where a player will be, and if the player character is too far off from that predicted location they get rubberbanded. With the greater delay time, it’s also more likely for the server to miss something important, like a character mounting a speeder – and doesn’t catch it until the player attempts a dismount. In several instances, players could rubberband for kilometers because of that particular scenario.

This morning, we executed a migration, taking us from the very old Dell PowerEdge 2950 to a moderately old Dell PowerEdge R810 sporting four 10-core, hyperthreaded processors (for a total of 80 logical cores), 128 GB of RAM, and a RAID of 146k GB 15k RPM hard drives. Moving forward, we would like to replace the mechanical drives with solid-state drives for better read/write performance, but we’ll be patient while waiting to raise the funds necessary.

In the meantime, with the new hardware, we’ve been able to push draw distances out much further (from 192 meters to 320) while maintaining a far smoother experience. The additional processing power also means the complicated scripting necessary for the upcoming Galactic Civil War system will not be a hindrance.

These are the notes for the patch released this morning.

It’s been one month and 12 days since the official launch of an Empire in Flames! During this short period of time, we’ve experienced tremendous growth. Roleplaying is getting started and various venues are being created by the players. EiF launched with a new player starter city outside of Coronet on Corellia. Broken Bridge was a great place to begin adventures and get the feel of the game again and EiF’s spin on it. As with any SWG environment and especially one filled with a majority of roleplayers, player cities started popping up within a couple weeks. Many now have their shuttleports and welcome visitors to their delightful towns and cities.

EiF asked the mayors of the cities to share some information with the community to give players an opportunity to find the city which will meet their own characters’ needs. Below find information about some of the cities in an Empire in Flames. A complete list of all cities and their mayors is at the end of this Friday Feature.

IC: We’re protecting the core from the dirty republic scum.

OOC: We have a guild running out of the city. Imperial Task Force Aurek (ITFA) which is a stormtrooper division, open to only human combat characters. The Fort though is a safe haven for all loyal imperial citizens and we accept crafters, entertainers, and neutral characters. I’d like to see a bustling metropolis where business and RP can thrive. I am offering free houses to all new citizens and over a month in free maintenance.

Also I am levying no taxes on the citizens.

IC description: Nestled between the mountains and protected from the harsh storms of the sand dunes of Tatooine sits a modest outpost. Cioral Station, funded and operated in part by the Csaplar Ruling Family’s agriworld colonial affairs program, is an independent colony outpost situated within the north-western mountains of Tatooine. Day-to-day operations focus mainly on the upkeep of the facilities, including the local bazaar, power generators, and various homesteads. Despite staking no claim in the Galactic Civil War as of yet, the presence of an Imperial base situated next to one of Tatooine’s rare oasis has not gone unnoticed by the few residents. Within the outpost, there are rumours and rumblings of a seedy underbelly taking shape. For now, though, too much energy is being spent on the foundations of the humble station to worry about galactic matters such as a “war.” The station is looking to expand and secure a foothold over the area and recruitment efforts are underway for more local colonists. The city currently offers an open bazaar, where residents can sell their goods in small shops that they can decorate to their desire while providing a central area for commerce. Future developments include a cantina, communal crafting hall, and medical center.

OOC intent: Cioral Station is new and ready to be shaped. We have an organic, but compact layout in mind to keep the frontier, outpost style as immersive as possible. We’d like to foster a close city community with the idea that, just as a real outpost, our work together can make us independent. In that regard, we’re actively seeking doctors, entertainers, rangers, crafters, merchants, and all other types of characters who are interested in a tight-knit community feel for both OOC and IC. The city is neutral in the GCW at this time, but that does not mean that it will stay that way and while there is no overarching plot to the city just yet, we are very open to just letting that develop as it comes. We’re looking for anyone interested in light, but tight-knit frontier/outpost RP. This can include working and managing within the city, but also in hunting parties on the outskirts for supplies and resources to later be sold in-town. We’re looking for players that are interested in helping the outpost grow and keep it maintained, which can be through various means. While cities cost a lot to run and are a community effort, this is meant to be a casual and fun community – no one will be expected to do anything other than contribute in their own way in a positive manner. If you have questions or are interested, feel free to respond here, send a tell to Sabosan’ola’nae in-game (be aware that I AFK survey while at work), or speak with me either in the Cioral Station discord (https://discord.gg/bBhzyyp) or privately (Blueberry#0459).

IC Description: Gnorton is a beautiful villiage located on Naboo, in the river washed lowlands southwest of Keren. Surrounded by scenic mountains and lovely riverfront property, it is hard to find a prettier place on Naboo. We welcome anyone who would like to join us, and offer no discrimination to anyone seeking a home in our gorgeous little corner of the galaxy.

Gnorton is a city about freedom. We offer an environment free of criticism no matter what individuals choose to do with their lives. You want to juggle kaadu’s? Hug rancors? Wear your underpants on the outside? As long as you don’t bother anyone, you are welcome in Gnorton. We are a peaceful and receptive city that wishes only the most judgement-free environment for its constituents.

OOC Intent: We are true to our words when we say we are about freedom, as there will never be a faction terminal or city-sponsored factional event (if devs take things out of our hands, we can’t police everything!) We intend to stay neutral, making it possible for players to have a community seperate from the ongoing conflict between the New Republic and the Empire. It’s okay to have friends on both sides! You’re imperial? Fine, just don’t bring your decorations and contentions within city limits. You’re organizing for the New Republic? Good for you! We have no interest in being the venue for your next demonstration. The idea is to respect everyone and leave the rest at the proverbial door. If someone leaves their hat on, just leave it be. We are looking to grow into a research center. We are capable of placing a shuttleport and only lack the citizens. We will also never, ever, EVER levy taxes for any reason. Donations to the treasury however, will never be refused. Any citizen is able to contribute to the city treasury via the city management terminal in city hall. And anyone can place any type of house that can be placed on Naboo.

City Name: “Cleveland” – This is mostly a temporary name placeholder 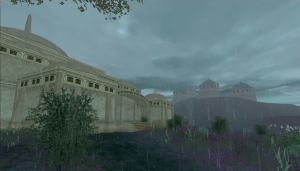 IC description: “Cleveland is a manufacturing and commerce city on Dantooine where the best products are produced and sold. The city is protected by an Imperial detachment but the Empire does not influence the every day life if the citizens. It is rumored that the city’s Imperial commander has seen the error in the previous regime’s anti-alien mentality and has waned on such scrutiny, making alien soldiers in the ranks a welcoming thing. The last rumor is that of a mysterious group of force-wielding “witches” that found their way off Dathomir have settled in the city, making it a refuge in a galaxy so foreign to their lifestyle.”

OOC intent: Manufacturing and Commerce, slight imperial alignment and a focus on “Witches of Dathomir”

Enjoy EiF and a Player City near you!