This week, Empire in Flames celebrated its fifth year with player-held festivities as well as the return of the annual Riddle Hunt. In today’s Friday Feature, we showcase some memories and learnings that members of the staff have shared from their years here at EiF.

What is one thing that you have learned since working on EiF?

Halyn: Players will always do the unexpected.

Mina: Scripting with LUA! It’s not something I had never dealt with previously.

Abi: There’s a reason we don’t have hard release dates – the second you set one, real lie gets in the way and you end up delayed by six months (or more)

Wefi: Halyn checks the files before putting them in. So no surprise Shrek.

Kelta: Things never go to plan. Also, we tend to think alike when it comes to hiding places.

Demi:  Always have several fresh clones of your dev environment at the ready.

Traycn: How clever players can be in regards to gameplay, collection hunting, and problem-solving.

Phoenix: Players break things that shouldn’t be able to break. LUA is a terrible language. We are capable of doing more than we originally thought. Learned a bunch of ASM/Hex Editing. 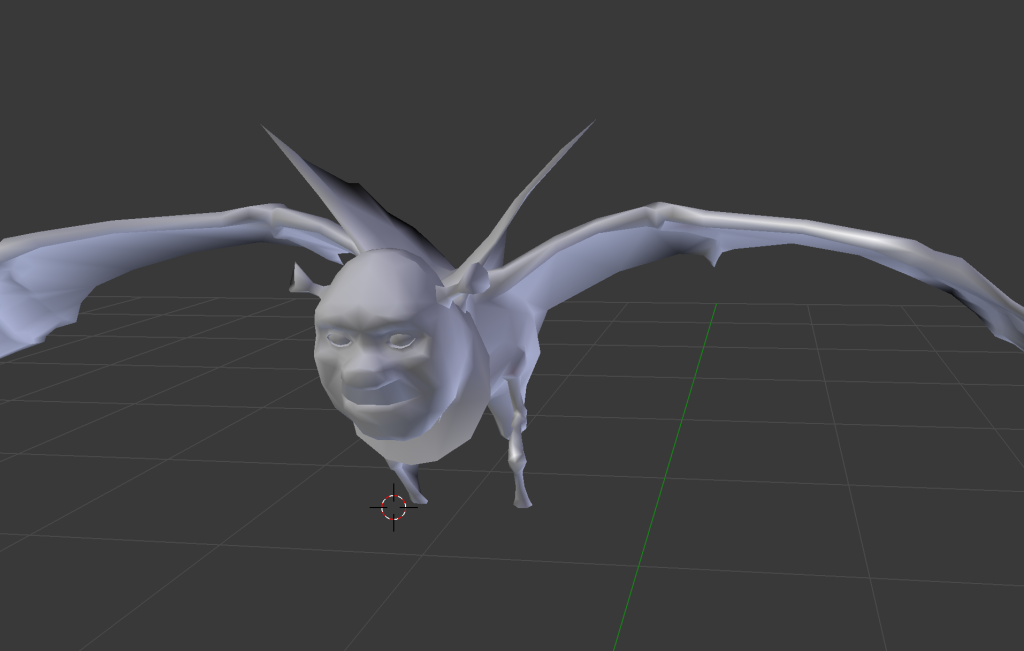 END_OF_DOCUMENT_TOKEN_TO_BE_REPLACED

May 4th, 2022 marks five full years of an Empire in Flames! It’s hard to believe it’s been this long, and it’s been an amazing journey so far. Since the ‘doors opened’ on May 4th 2017, EiF has seen a lot of updates, unique content, and new additions that truly make us different than any other SWGEmu server out there. There’s so much that we’ve done over the last five years that it’s almost impossible to list it all, but here’s a brief overview of the major updates that have been released on EiF:

Don’t worry, that’s not all. We have so much more planned that we can’t wait to share with you. On that topic…

We’re excited to announce that the Mandalorian Enclave content is officially Coming Soon. That’s right, actual soon and not soon(tm). There are still some final tweaks to be made before its ready, but we hope to have it live and available to players in the coming weeks. Stay tuned for more info!

In the meantime, we pulled some fun facts and data from the last 5 years. Enjoy! 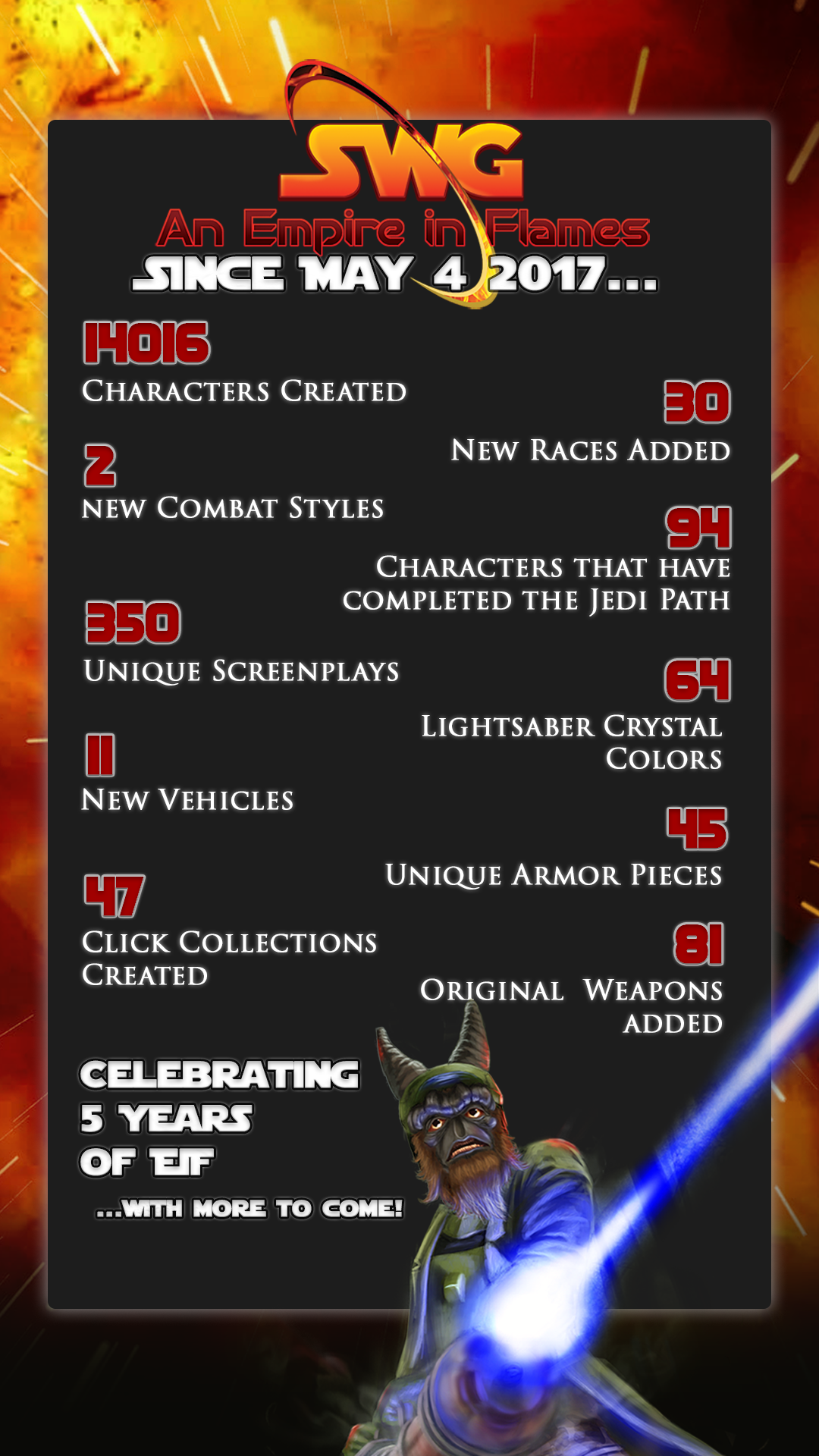 Not Featured: 14 Characters deleted and rerolled by Demiurge 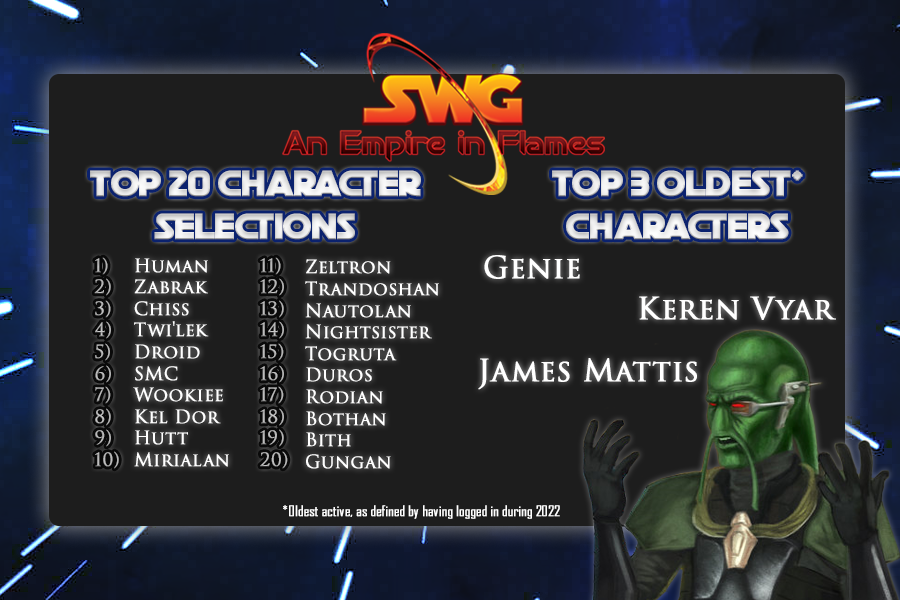 It’s been a wild ride! We want to thank you for being a part of the last five years and hope to see you for many more. We’re EiF. We do the weird stuff.

Happy Anniversary! Today marks 5 years of Empire in Flames, and here are notes to go along with today’s 05/04/2022 patch.

Here are the notes for the patch released on April 16, 2022, debuting The Great Fashion Disaster!